How can we help you today?

Since its very beginning, Amara has been using an alphabetically ordered drop-down list for selecting languages. This worked well when the Web page was displayed in English, but in the UI translated into other languages the sorting in the list would sometimes get really messy - for example, English and English, British, French and French (Canada), Spanish and Spanish, Mexican could be placed well apart from each other. As the result, some languages could be really hard to find.

To address this issue, we have now changed the way the list of languages is sorted. At present, languages are arranged by the code they have in ISO 639 (e.g. 'en' for English, 'es' for Spanish, 'zh-cn' for Chinese Simplified, 'de' for German, and so on). This order remains the same regardless of whether the Web page is in English or is translated into another language. For your convenience, in some drop-downs an extra group, "Your languages" or "Popular languages" has been added at the top. "Your languages" matches the language preferences in your user profile; "Popular languages" includes 25 languages that are the most popular on the Web. 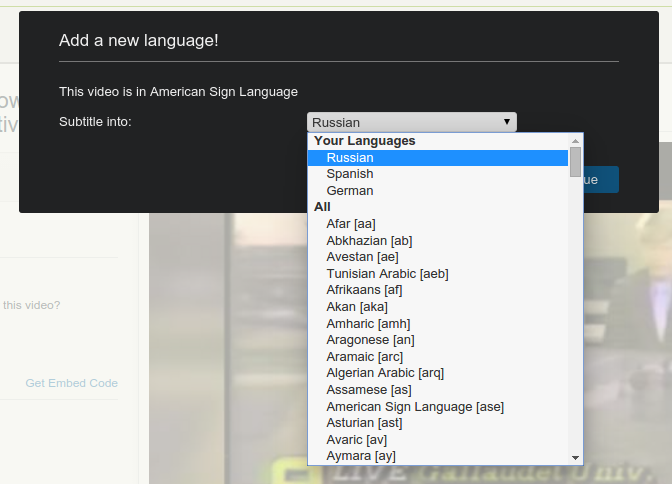 Important: If you are unsure what ISO code the desired language has or have trouble finding a particular language in the list, please check the help page here.

Please note that the drop-down lists for video language and subtitle language in Search tool on Watch page are sorted in a different way - by popularity of the language on Amara.

Did you find it helpful? Yes No

Send feedback
Sorry we couldn't be helpful. Help us improve this article with your feedback.